I have a new Fantasy Premade book cover for $50.00 with thanks to photographer Adina Voicu.

Natalie West thought her ability to manipulate fire was a genetic aberration straight out of a Marvel comic. Orphaned at age three, she’s spent her life hiding what she can do. But like any secret superhero, she also uses her powers for good, investigating fires for the San Jose Fire Department.

When a series of arsons marked with pentagrams brings her into Andre Romero’s sphere, however, Nat discovers she’s not as alone as she thought. Who is this man who also wields fire? An ally? Or one of the arsonists? As Nat delves into a world of elementals, witches, and magic, learning more about her heritage in the process, she’ll have to watch her back or risk getting burned.

Also available in this series: 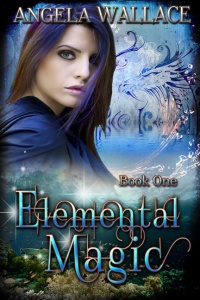 Aileen Donovan wants nothing more than recognition as a scientist by her supernatural community. What better way to do that than to solve a mystery involving a power-hungry alchemist, hallucinogenic coral, and a homicidal sea dragon? The hard part will be working with Coast Guard officer Colin Benson–until the tides turn, and Aileen realizes that love and duty may not be mutually exclusive.

Aileen Donovan is an elemental with magical control over water. When she finds a mummified body at a scientist convention, she suspects supernatural foul play. As more bodies turn up, Aileen’s amateur sleuthing not only pits her against a serial killer, but also a vampire lord, and an elemental agent with ulterior motives. Can she stop a murderer, or is she out of her supernatural league?

Nita Young doesn’t know if she has a future with college sweetheart Keenan Donovan–two star-crossed lovers of opposing elements–but she invites him up to Alaska to see if Earth and Water can rekindle their old flame.

When a series of wild animal attacks strike the inhabitants of Yakutat, Nita has to put her romantic plans on hold. Mangled bodies are turning up, and a mysterious black panther has been spotted in the woods. Fur, scales, and a venomous bite suggest the cat is supernatural in origin–and evidence indicates that someone not only summoned it, but is using it to target those Nita cares about. It’s the perfect murder weapon: no fingerprints, no evidence. And in a town this small, the killer is someone she knows.

Nita’s strength will be put to the test as she faces losing her friends, her town, and the man she loves.

Nita Young is getting ready to marry Keenan Donovan when an unnatural earthquake crashes the wedding. As the only elementals in the area, they are sent to investigate and discover an archaeology team has unearthed an ancient and powerful artifact. After Keenan is accidentally infected with its magic, Nita must unlock the relic’s secrets before its consuming powers tear her fiancé apart. 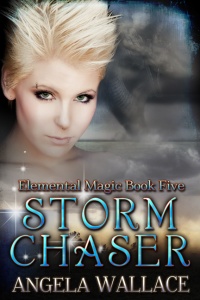 Air elemental Sylphie Seaton has the perfect job–chasing twisters. Every year she and her team of elemental scientists hit the road during tornado season to track the elusive weather phenomena in order to collect new data.
Things are about to get complicated when Eric Gage, an extreme photojournalist, comes along for the ride. He’s human, and completely ignorant about the supernatural world. Sylphie can’t decide whether to find the man charming or infuriating, a tension that’s tested when they go up against one of Nature’s most volatile forces.

Sylphie Seaton’s life is about to get turned upside-down when her brother ends up wanted for murder. Framed and dying from exposure to a genetically engineered super serum, Josh turns to Sylphie for help clearing his name and finding a cure. But the conspiracy may go deeper than either of them ever imagined, and not even an acclaimed storm chaser can outrun this tempest.

Aileen Donovan is an elemental with magical control over water. When Aileen finds a mummified body at a scientist’s convention in Seattle, she suspects supernatural foul play. Her amateur sleuthing, however, isn’t the romantic getaway her human boyfriend, Colin, had in mind. Breaking into crime scenes and fending off black magic doesn’t really set the mood.As more bodies turn up, Aileen’s insatiable desire to solve the mystery not only pits her against a serial killer, but also a cunning vampire lord, and an elemental agent with ulterior motives.But the closer Aileen gets to the killer, the further she finds herself from Colin. Can she try to salvage their relationship and stop a murderer, or is she out of her supernatural league?
Amazon: http://www.amazon.com/Spell-Elemental-Magic-Angela-Wallace-ebook/dp/B007OLC7KE/
B&N: http://www.barnesandnoble.com/w/dry-spell-angela-wallace/1109847277?ean=2940014668125
Smashwords: http://www.smashwords.com/books/view/143806

Also available in print
Amazon link: http://www.amazon.com/Elemental-Magic-Angela-Wallace-ebook/dp/B006AF90PK/
B&N link: http://www.barnesandnoble.com/w/elemental-magic-angela-wallace/1107874099?ean=2940016215303
Kobo link: http://store.kobobooks.com/en-US/ebook/elemental-magic
Charmed meets The Last Airbender!
Aileen Donovan is an oceanographer with magical control over the element of water. While her normal focus is on research and fighting poachers, she’s about to go up against the stuff of legends–and that’s saying something for a supernatural.A transport ship is missing and everyone’s eager to get their hands on the cargo. No one knows what it is, but when fragments resembling coral begin to drive local residents insane, Aileen suspects a preternatural source. Whatever is at the bottom of the ocean, a power-hungry alchemist wants it, and releases a sea dragon to eat the competition–literally.Aileen sees this as an opportunity to win the professional recognition she desires, but keeping secrets is complicated when she’s working with local Coast Guard officer Colin Benson. Her sense of love and duty will be put to the test, and when the tide washes out, it might have been better if that lost ship had stayed lost.
Connect with Angela Wallace
Blog: http://angelawallace.wordpress.com/
Newsletter: eepurl.com/j9PN5

In this short story spin-off from the Elemental Magic series, Paige Benson, an investigative journalist, tackles a mystery of missing pets in a quaint Seattle neighborhood. As far as investigations go, she’s been on more dangerous ones, but Paige is about to bite off more than she can chew when she realizes there may be a supernatural component. Throw in a confrontation with a blast from her vampire boyfriend’s past, and Paige once again finds herself in the middle of a supernatural showdown.
Link to Amazon: http://www.amazon.com/Supernatural-Sleuth-Case-File-ebook/dp/B00EG10E4G/
Link to B&N: http://www.barnesandnoble.com/w/supernatural-sleuth-case-file-1-angela-wallace/1116282364?ean=2940045182201
Link to Kobo: http://store.kobobooks.com/en-US/ebook/supernatural-sleuth-case-file-1
Link to Smashwords: http://www.smashwords.com/books/view/341601
Angela Wallace’s blog: http://angelawallace.wordpress.com/ 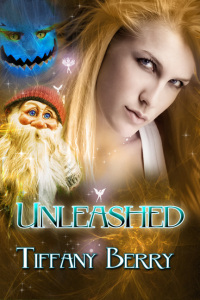 Ace is Wild
Uprooted from a small Texas town, Florence “Ace” Fox is stashed in a camp for orphans, Weirdness abounds with the director talking of wizards and casting spells. He even claims she’s possessed, and that the entity is sending her power levels off the charts.
Rebel Wizards learn of her strength and decide they can use Ace to their benefit and greed to gain control of The World!!  They plot against her.
In danger and on the run, Ace and her friends’ travel through the old west looking for a way to rid her of the entity. They discover that only the leaders of the wizarding world can help, but will she like their solution?
Jail, death, or powerless.
http://www.amazon.com/Ace-is-Wild-ebook/dp/B009AZWCUC/ref=sr_1_sc_1?s=books&ie=UTF8&qid=1347915331&sr=1-1-spell&keywords=Ace+is+Wild+by+CB+Mckee
https://www.smashwords.com/books/view/235812
Blog
http://wizardme.wordpress.com/

Spittyfish Designs arose from a passion to create pretty pictures, to bring fantastical ideas to cyber light, to brainstorm difficult plots into being, but, then one has a lot of finished images cluttering up their drivespace. So, I thought I'd hang a shingle, a design shingle. My idea is to design pretty images, but to steer away from graphic adult content. My topics of interest are fantasy, paranormal, steampunk, sci fi, and some contemporary.